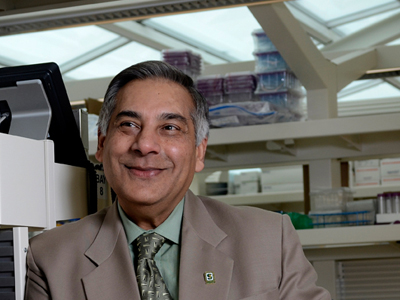 The work in Fazleabas laboratory has significant translational relevance related to improved pregnancy outcomes in infertile women as well as understanding the etiology and the pathophysiology associated with the development of endometriosis. A significant area of his research emphasis has been to study the early events associated with maternal-fetal interactions during the establishment of pregnancy and the mechanisms by which these interactions are affected in women and non-human primates with endometriosis. The Fazleabas laboratory was the first to demonstrate that chorionic gonadotropin acts directly on the uterus in vivo and using this “simulated pregnancy model” went on to demonstrate that the early luteotrophic signal from the primate embryo is critical for initiating the decidualization response and remodeling the luminal epithelium to enhance trophoblast invasion, responses that are attenuated in endometriosis as a consequence of progesterone resistance. Recent studies have shown that infusion of chorionic gonadotropin in women undergoing assisted reproductive therapies improves the endometrial environment to facilitate the successful establishment of pregnancy. These studies have led to the more recent extensive studies related to embryo implantation and maternal fetal interactions and have focused specifically on the role of NOTCH1 during the process of decidualization. In addition to studies in the non-human primate and in stromal cells from women, his laboratory has also developed novel transgenic mouse models which have cell specific gain of function and loss of function properties to study the role of NOTCH signaling in implantation, decidualization and endometriosis. In addition to the basic fundamental role that NOTCH1 plays in initiating the decidualization process as well as post-partum repair, recent data from the laboratory also suggests that altered NOTCH signaling as a consequence of endometriosis, has a significant impact on an aberrant decidualization response in the eutopic endometrium and promotes lesions development at ectopic sites. The focus of these studies are to understand the 1) fundamental mechanisms by which NOTCH1 interacts with FOXO1 and progesterone to promote decidualization and the role of the Hippo signaling pathway in regulating NOTCH1 transcription, 2) the mechanisms by which inflammatory cytokines regulate E-box proteins to upregulate NOTCH signaling to enhance endometriotic lesion development. In conjunction with the studies on the role of Notch signaling in the pathophysiology of endometriosis, his laboratory has also identified specific microRNA’s that are altered in both the ectopic and eutopic tissues of baboons and women with endometriosis. These studies have specifically focused on target genes that are regulated by microRNA’s 451, 200, 29c and 21 which in turn contribute to enhanced proliferation, suppression of apoptosis, development of progesterone resistance and fibrosis, which are all hallmarks of endometriosis related pathologies. Current studies are also focused on using RNASeq and Proteomics to identify potential biomarkers for the diagnosis of endometriosis and using small molecule inhibitors conjugated to nanoparticles for therapeutic targeting of endometriotic lesions.

R01 HD 094842 - “What is Endometriosis? Deep Phenotyping to Advance Diagnosis and Treatment” – Co-PI