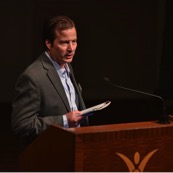 Dr. Knott received his BS degree in Animal Science (1997) and PhD degree in Reproductive Biology from the University of Massachusetts, Amherst (2002). After his doctoral work he was a NIH T32 postdoctoral fellow at the University of Pennsylvania (2003-2005). Prior to joining the faculty at Michigan State University he completed a second postdoctoral fellowship at EMD Serono Research Institute (2006-2007) where he conducted both basic and translational research.

Research in the Knott laboratory is focused on identifying molecular mechanisms that regulate early embryogenesis in mammals. Specifically, we are interested in transcriptional and epigenetic regulators that control cell polarity, pluripotency, and trophoblast lineage formation in preimplantation embryos. Alterations in these early embryonic features has dire consequences including preimplantation arrest, implantation failure, and early miscarriage. Lost-of-function and gain-of-function studies are being performed in mouse preimplantation embryos and embryonic stem cells to determine the role of these regulators.